Clockhouse took 2 teams to the Havering Boccia Festival. Clockhouse have found success in recent years in the event. Before Covid the Clockhouse team from Greenland not only won The Havering Festival, but advanced to the London Youth Games representing the borough where they were once again victorious!
Boccia (pronounced 'Bot-cha') is a Paralympic sport introduced in 1984. Athletes throw, kick or use a ramp to propel a ball onto the court with the aim of getting closest to a 'jack' ball.
Clockhouse 1 had the following results:
Harold Wood - won 3-0
St Peters - lost in the tie break 2-1
Ardleigh Green - lost 1-5
Clockhouse 2 had the following results:
Harold Wood - Lost 3-2
St Peters - won 2-1
St Peters - won 3-1
As a result of the scoring in the group stages Clockhouse 1 were in the 3rd place playoff which that won by beating Harlow Wood 3-2. Im addition Clockhouse 2 were through to the final where they played an impressive Ardleigh Green team and sadly lost 5-0.
Mr Yarrow reflected on the competition saying 'It is great for the achool to try Paralympic Events, it is eye openning to some!
The children showed great teamwork and were unlucky not to get the victory. That being said some things are more important than winning and losing. The experience and opportunity we gave to these children is hopefully something they will remember!
Thanks to Miss Munroe and Mrs Elliott for working with the teams. Thanks also to the parents for transporting the children.
2nd and 3rd is incredible!!!'
SQUAD: Kyran M, Ben A, Ellijah R, Jody W, Denzel A and Bobby M-J

Clockhouse represent Havering Hurricanes as they blow away all competition to win the London Youth Games!

Yesterday the school boccia team who won the Havering Festival in January represented Havering at the London Youth Games competition.

The Havering Hurricanes were drawn in a group with Enfield, Redbridge, Tower Hamlets, Newham, and Bromley. The Clockhouse team got through the group stage undefeated.

As a result of winning their group Havering faced Walthamstow in the final game. A win would ensure Clockhouse were Champions of London and could progress to the Greater London Tournament. A tough game ssaw Clockhouse lose the first end before winning the final two ends to secure a 3-2 victory.

Mr Yarrow spoke about the achievement by saying 'This is one of my proudest moments since joining the school. The three boys from our provision in Greenland stepped out of their comfort zones once again and managed to beat everyone they played. From what I saw, and was told the boys represented the school impeccably whilst having fun and making some life long memories.

As a school we have been blessed to represent Havering Hurricanes on numerous occasions but I can not recall ever winning a London Youth Games Competition. This is a huge achievement!

Thank you to Miss Munroe and Mrs Redgrave who accompanied the team to the tournament. A further thanks to all the parents that helped support the team today I hope you are as proud of the children as I am!

I don't know what impresses me more the fact the Havering Hurricanes remained undefeated, the team work on show throughout the competition, or the resilience the squad showed to come from behind in the final to take victory.

As a result of becoming champions of London the team get to now take part in the Greater London Competiton in March. I wish the boys all the success once again!'

Cracking Performance from Clockhouse as Team Greenland gets the Gold!

Clockhouse entered 2 teams into the Havering Boccia Festival. Traditionally the school have a great time at this event with children showing a real passion for representing the school.

The 1st team was Team Mainstream who had a very successful competition racking up these results:

Win 4-2 vs Drapers Brookeside B

As a result of the teams brilliant performance they finished 2nd in their pool missing out on progressing to the finals on points scored.

Our 2nd team was Team Greenland who recorded the following results:

As a result Team Greenland went into the finals where they showed great composure and some very good tactical awareness to win the Havering Boccia Festival! The final round of results were as follows:

Mr Yarrow reflected on the competition saying 'I love this competition, it is played in the right spirit and the ethos of fun competitive sport is great to see.

The standard of all schools was really high. When I watched the final game with Harrow Lodge A the lead changed hands on numerous occasions and the fact the team stayed so calm and methodical is a real credit to how far they have come!

All six of the children were a real credit to the school! I could not be prouder of their positive attitudes!

Today was not all about winning but it is a massive achievement that both teams only lost two games between them the whole day.

As a result of the victory the Team Greenland get to go on to the London Youth Games on 25th February and represent Havering against the other London Boroughs. I am very excited to see how far the team can go.

As a reward for the success we will be having a chip shop lunch with the team to celebrate!

I'd just like to finish by once again saying how proud I am of the children for stepping out of their comfort zones. Not enough attention is put on PAN and PARA sport and the effects it can have on wellbeing. Team Greenland are all year six children so this was their final attempt to represent Clockhouse at this event and it goes to show heart, passion and teamwork go along way!

Well done to the six children that are now Havering Boccia Champions!!!' 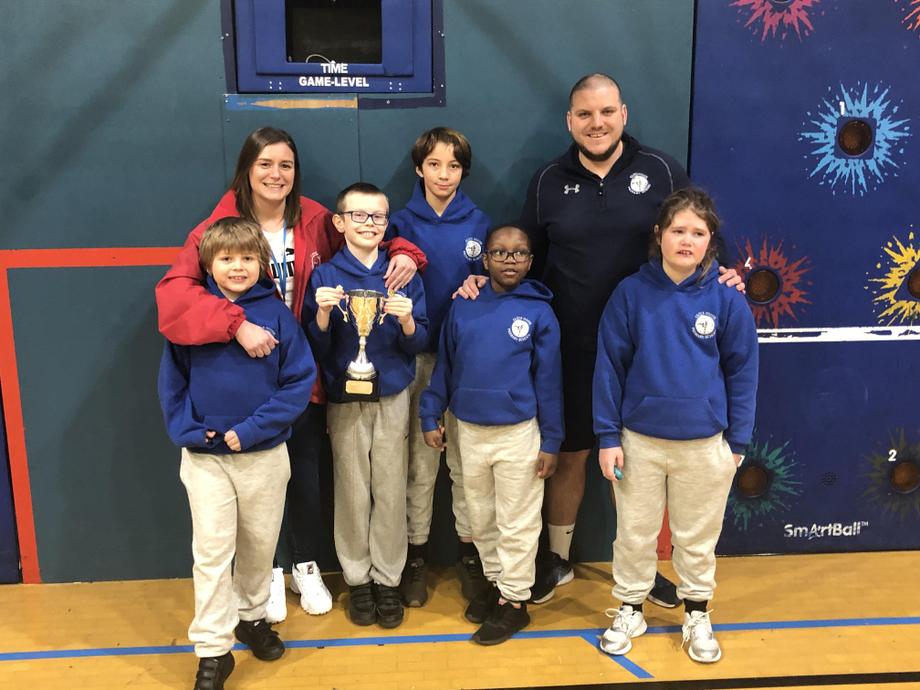 Clockhouse took two sides to the Havering Boccia Festival last week. The teams were given letters to make it easier to identify each team. Clockhouse were given A & F.

The results for the group matches were:
F
Won 3-1 vs Hylands
Won 2-1 St Peters
Won 3-2 Newtons
Won 4-0 Scotts
A
Won 2-1 vs Drappers
Drew 1-1 vs Scotts
Lost 2-0 vs St Peters
Lost 3-0 vs Newtons
As a result Clockhouse F finished 4th overall in the standings while Clockhouse A finished 6th once results were combined.
Reflecting on the festival Mr Yarrow said 'Boccia is one of my favourite events in the sporting calendar. Pupils engaged with children from other schools & also get to compete in a fun environment!
All of the children did the school proud! Team Greenland were unlucky not to progress further having won so many matches. Denzel was full of energy and played some fantastic shots on his debut, and special mention to Leon W leading the side in his final appearance. Leon has had years of experience and will be very missed. Thank you to all the parents and Mrs Jackson for supporting the event! Well done team Clockhouse!'
TEAM: Leon W, Elliot R, Toby A, Teddy O and Denzel A 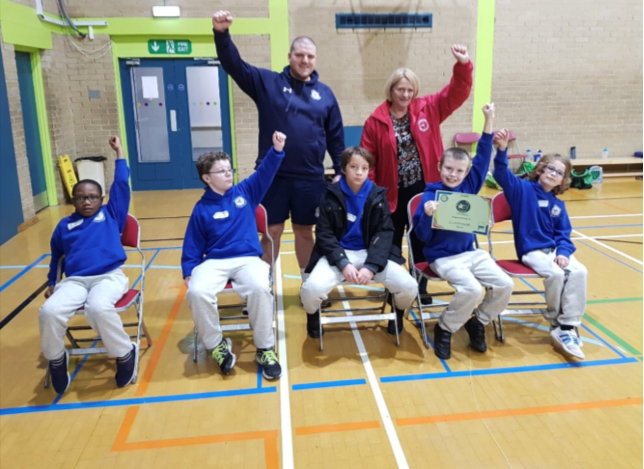 Clockhouse do brilliantly at Boccia

For the first time Clockhouse Primary School entered two teams into the Havering Borough Boccia Tournament. Boccia is a precision ball sport similar to bowls. The sport is contested at local, national and international levels, by athletes with physical / learning disabilities. It was originally designed to be played by people with cerebral palsy but now includes athletes with other disabilities affecting motor skills. In 1984, it became a Paralympic sport, and in 2008 was being practised in over fifty countries worldwide.

Team A played 6 games winning 3 out of 6 while Team B won 5 of 7. The results meant Clockhouse finished 3rd and 4th in the tournament. This is a huge success for the school to have two teams working so well and achieving great results! But the children taking part did the school proud!!!! 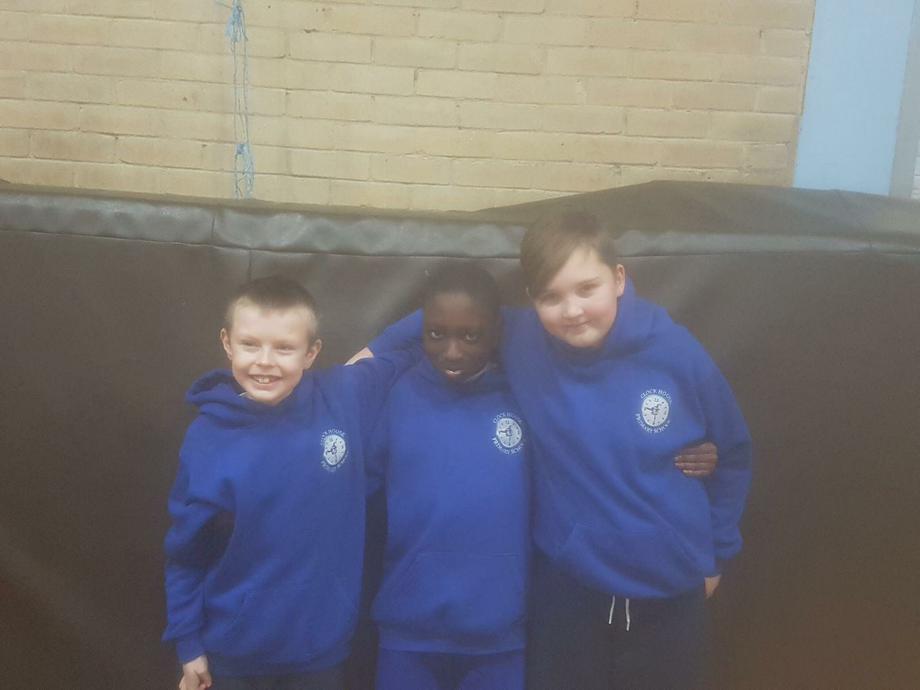 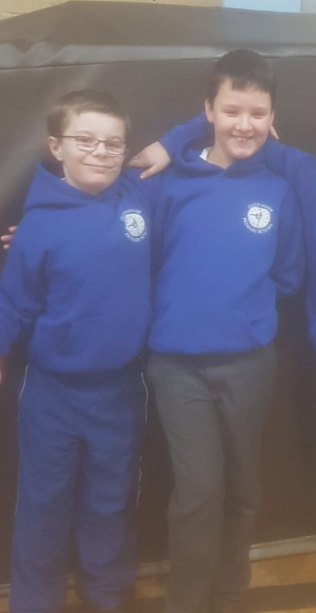